Patrizia took part in an interview in which she was asked about her role within the network and her expectations. Below is a transcript of the interview which has previously featured in the EURO-NMD monthly newsletter .

a. Tell us a little bit about yourself
“Professionally I have been a journalist, a non-fiction writer and a communication consultant for almost 30 years. I am also a qualified career counsellor at Stockholm University and I was actually working in Sweden within the integration of refugees when a rare neuromuscular disease changed my life.

I was diagnosed with an acute-onset Chronic Inflammatory Demyelinating Polyneuropathy in December 2016. General practitioners in Sweden had wandered in darkness for months without having the faintest idea about what my “weird” array of symptoms could mean and when I finally decided to move back to my home town in Italy I had nearly lost the ability to walk. Back in Italy, I spent three months lying in an hospital and it took me a year of constant rehab-sessions to regain the capacity to hold things, to stand and walk. Since then I have had a slight permanent disability and I am bound to a therapy that has required me to spend around 60 days per year in hospital.

The disease struck my life with a storm-like impact. Nothing was left in the same place as it was before. I was forced to leave behind everything I had rebuilt in Sweden in ten years for moving back to Italy where I started almost from scratch, once again.

But I was still lying in my hospital bed that I was already thinking about how to engage myself in advocating people with rare peripheral nerves diseases and I joined CIDP Italia, the Italian patient organization for dysimmune neuropathies, straight away in 2017.“

b. What is your role in EURO-NMD?
“In EURO-NMD I am a member of the Patient Advisory Board in which I represent CIDP Italia as an alternate of its president Massimo Marra. Since CIDP Italia is a founder member of EPODIN, the European Patient Organization for Dysimmune and Inflammatory Neuropathies, I am also the Italian voice of this organization.“

c. What are your expectations of the Network?
“As CIDP Italia we would like that every patient with a rare neuromuscular condition could receive the best possible care regardless where he or she lives in Europe. We are aware that the situation is unfortunately still very patchy and scattered by lights and shadows. Sometimes a difference of few kilometres may still affect dramatically the length of time a patient should wait before being diagnosed or the way he/she access treatments.

The network can be a tool to detect and tackle such inequalities for instance in drawing European guidelines, in implementing and strengthening communications among healthcare providers, in making data exchange easier for researcher on the field.

Particularly, I believe that EURO-NMD guidelines can empower patient organizations even at their national level when they have to deal with national regulatory documents. I wish EURO-NMD could implement participatory processes that would give patients the opportunity to share responsibility in making the European healthcare system better.”

Patrizia is involved in these different areas of the network... PAB Member - ePAG 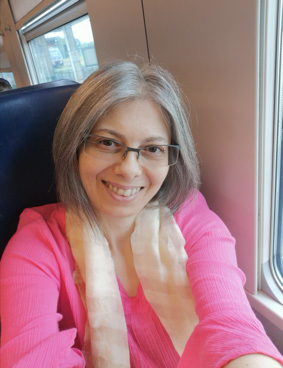